I am incredibly sad with the news about Bill Cunningham. He passed away yesterday, June 25 of 2016, at age 87. Bill was a legend and left an imprint on the fashion industry, the street style photography. He once said "The best fashion show is definitely on the street. Always has been and always will be." And he was the turning point. The eyes turned to the streets, to those elegant people flashed by Bill will roaming around the city with his iconic blue jacket. I even dare say that today, at least half of fashion week interests are about street style. But don´t be fooled, Bill photographed it all, New York streets were his field, but you could also get a glimpse of him inside the shows and various events. Famous for photographing the famous and the unknown, the classic and the eccentric, the fashion and the parades. That was Bill, a true talent.

Back in 2015, when I was in New York, I decided to go take a look at the annual Saint Patrick´s parade which of course was fantastic, but it seemed that a very famous photographer was mixed in the crowd. I did a little shopping at Bergdorf Goodman on 5th Av. and when I came out I spotted him. Bill Cunningham was doing his thing. I kind of freak out and my mom wanted to take a picture. I felt really ashamed but I couldn´t stop her. I remember saying "you can´t take a candid of the man who popularized candids". Now, I have that phone taken picture and will never forget it. Approximately a year later, for the Easter Sunday Hats Parade, my eyes met the blue jacket again. Think about it, I am a person who visits New York and got the chance of seeing him doing his work, such an iconic work.

Even though I know I will never be photographed by Bill, his pictures will exist forever for me and for many others to learn.
R.I.P. Bill Cunningham. 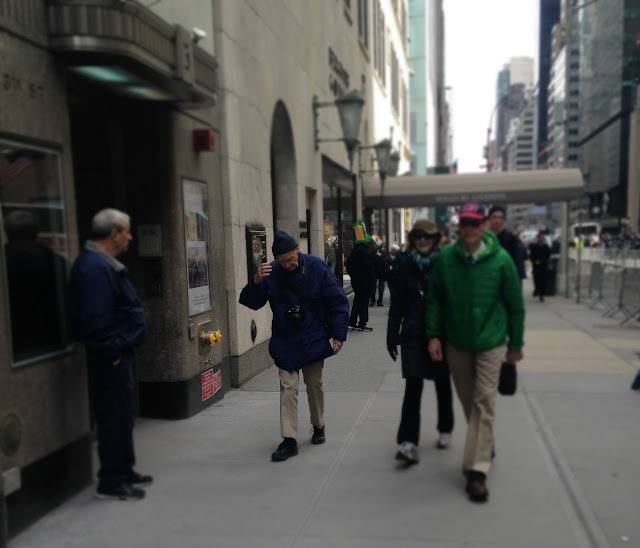