We usually don´t have two awards shows in one night, but today is the day in which history is being made. On one hand we have BAFTA awards, the pre Oscars, held in the ancient city of London, while on the other side of the ocean (and USA), a couple of hours later, the Grammys came by to award the best in the music industry in the past year.

Following the timetable I´ll start with some of the best dressed from the BAFTA awards. This is my top 10 : 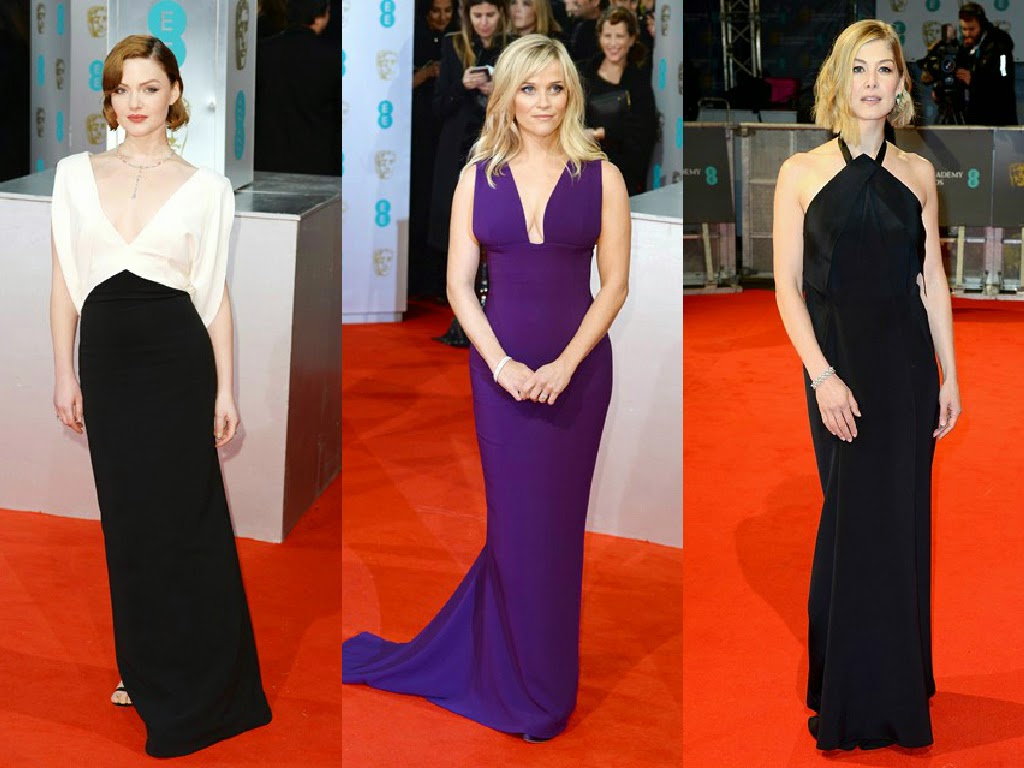 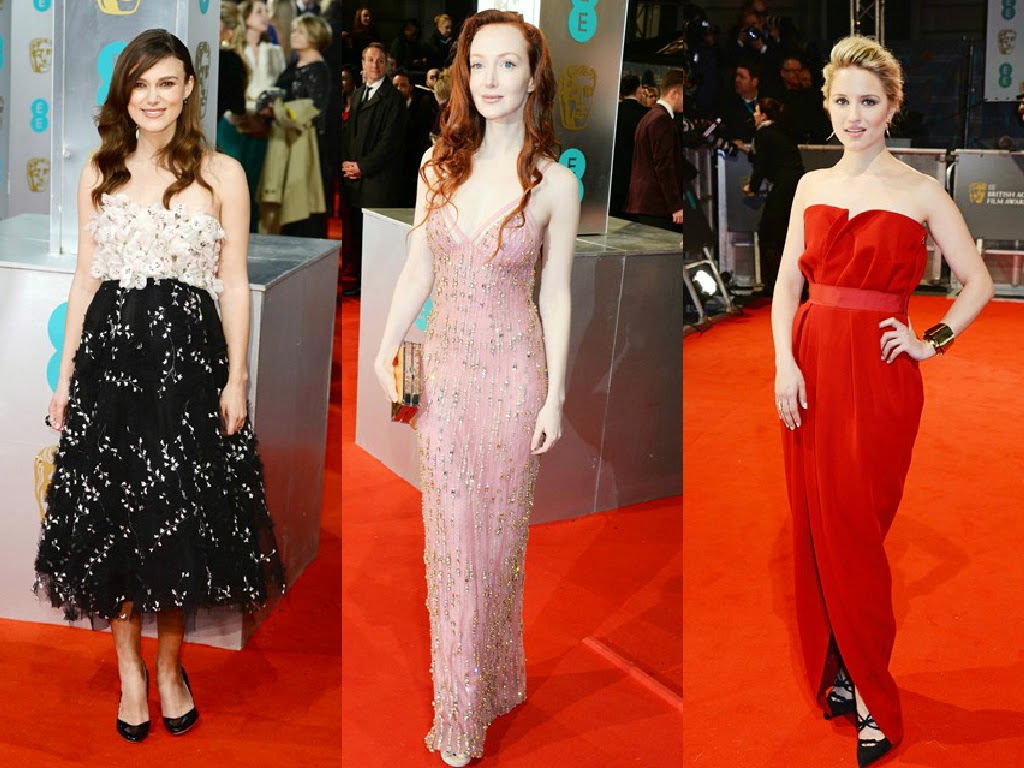 4- Charlotte Riley
Getting into the top 3 we have:
3- Felicity Jones, and I must say her hair is so on point!
2- Julianne Moore in Tom Ford, and it´s becoming a habit to have her in the best dressed list this season! 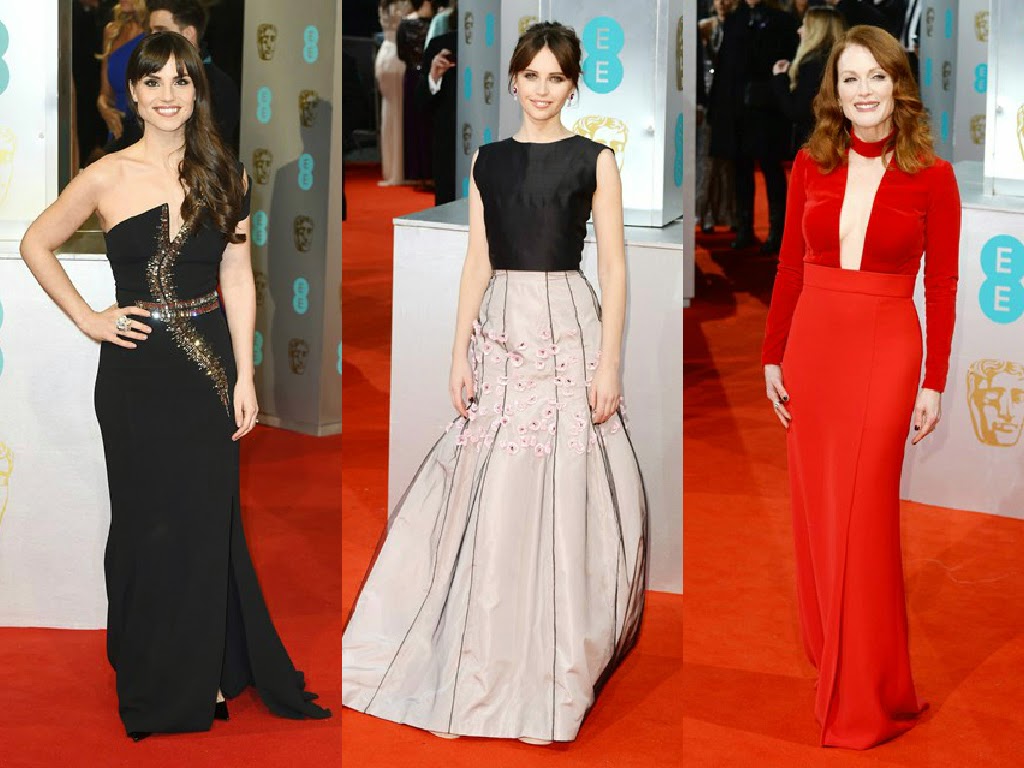 Bonus Track: But before heading to the first place, let´s discuss what´s hot for men. Tie bow ties (because of the dress code) and velvet suits? They are definitely not wearing their prom suits!
In order of appearance: Eddie Redmayne, David Beckham, Douglas Booth and Michael Keaton. 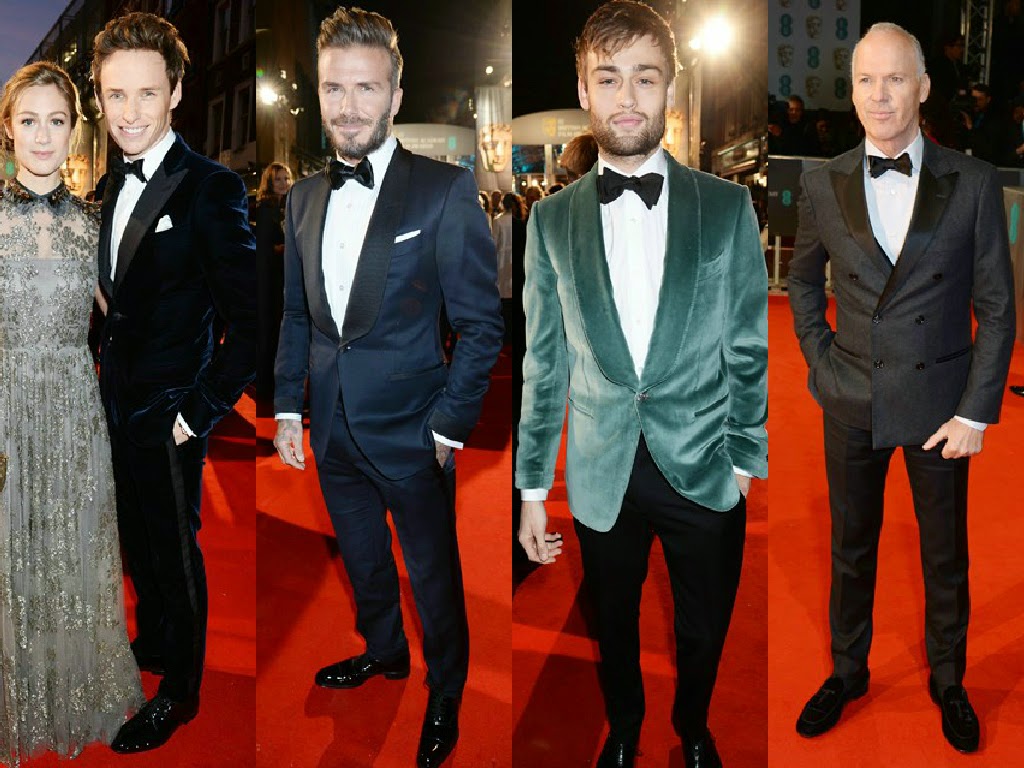 1- Last but definitely not least. Amy Adams in a white custom made Lanvin gown. The reason why she is in this place is because it respects the dress code but is still not the classic red carpet gown, with that belt and straight hair. 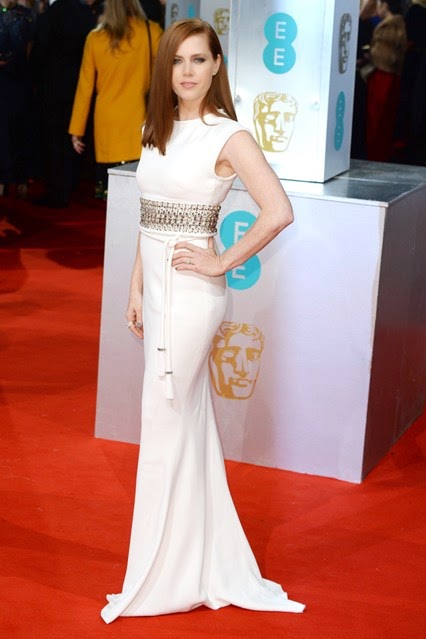 With this looks I can´t wait for the Oscars now, but the Grammys come before it and that´s what comes next.
A more easy going red carpet, full of innovations and daring outfits. Everybody wants to take the looks. I believe that this year was calmer than the previous ones, with this I want to say that apart from the deep cleavages, there wen´t many controversies (there are some obvious exceptions, you´ll see)

As the majority dressed up in black, it makes more sense to start with them. First we have the embroidery and transparencies gowns.
Beyonce, Jesse J in Ralph & Russo, Nicki Minaj in Tom Ford and Megan Trainor in Galia Lahav. 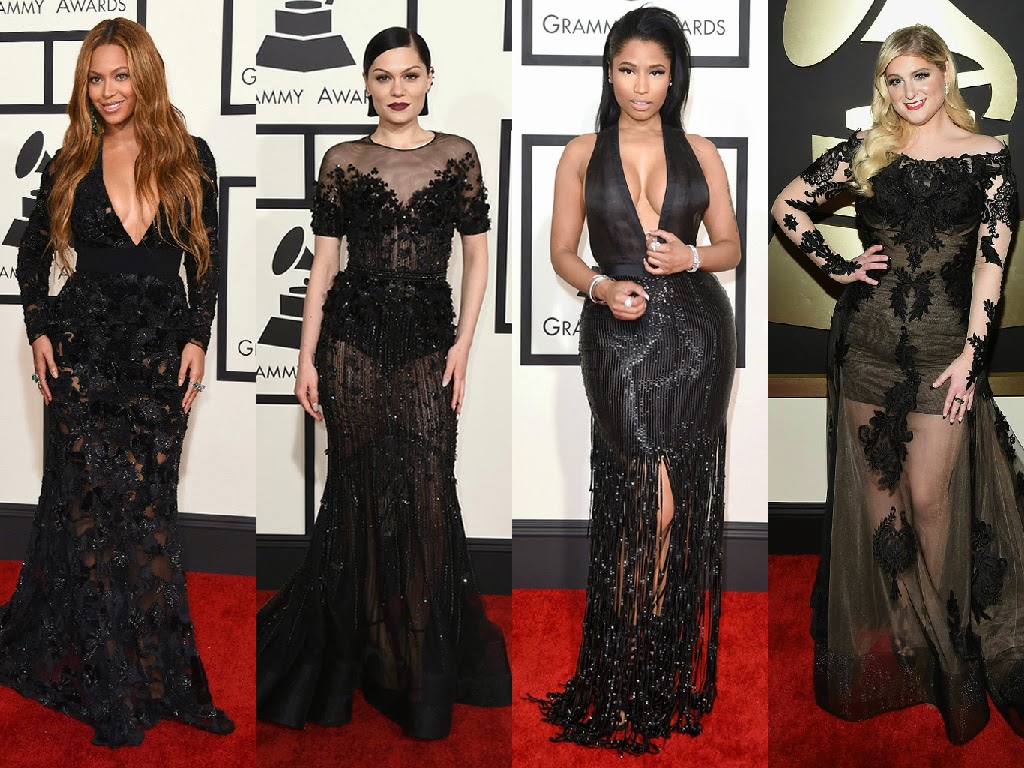 And that was not all, some of the "ladies in black" went for the trousers, look:
Anna Kendrick, Giuliana Rancic in Inbal Dror, and Gwen Stefany in Versace. 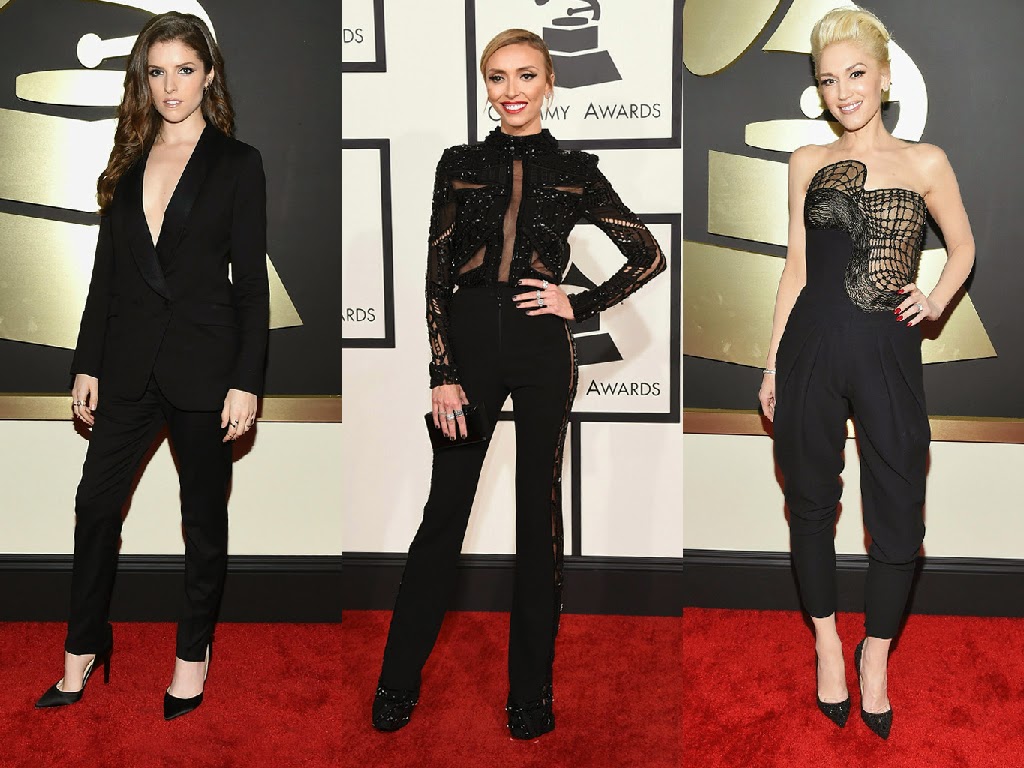 Even more black! Here we have the plain dresses vs the most opulent (and controversial).
Madonna in Givenchy, Miley Cyrus in Alexandre Vauthier and Miranda Lambert. 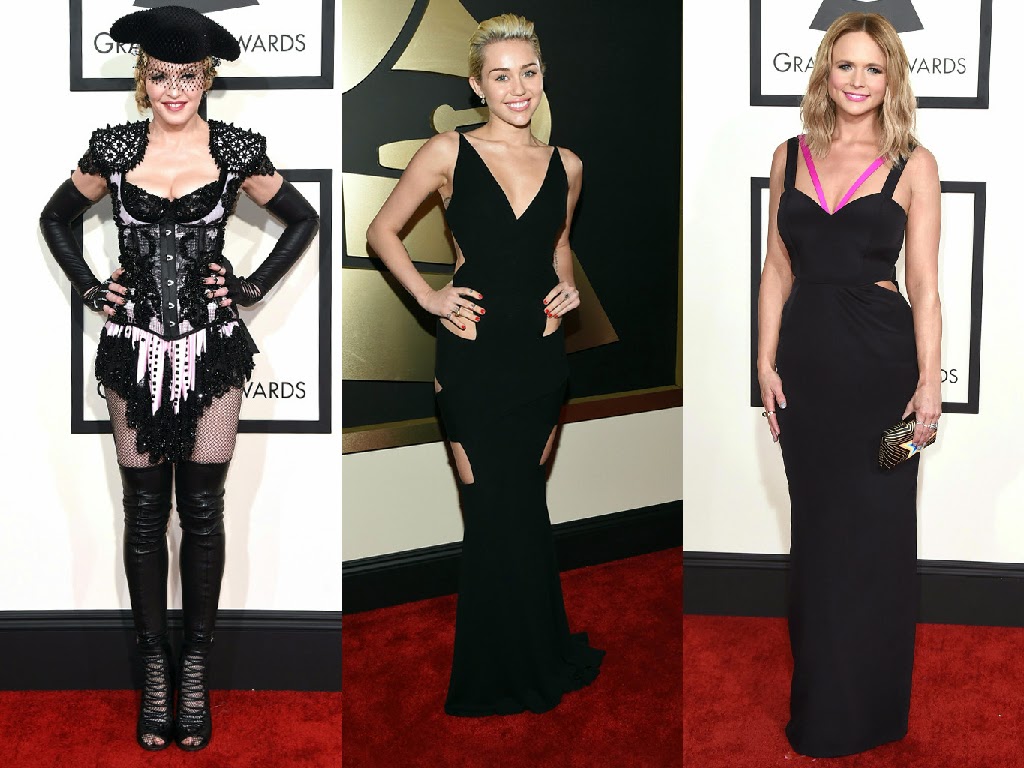 If you prefer white to black, it was also present.
Ariana Grandre in Versace, Chrissy Teigen, Jennifer Hudson in Tom Ford and ... Chalie xcxc in Moschino.
I would include the last one in the controversial outfits of the night too... 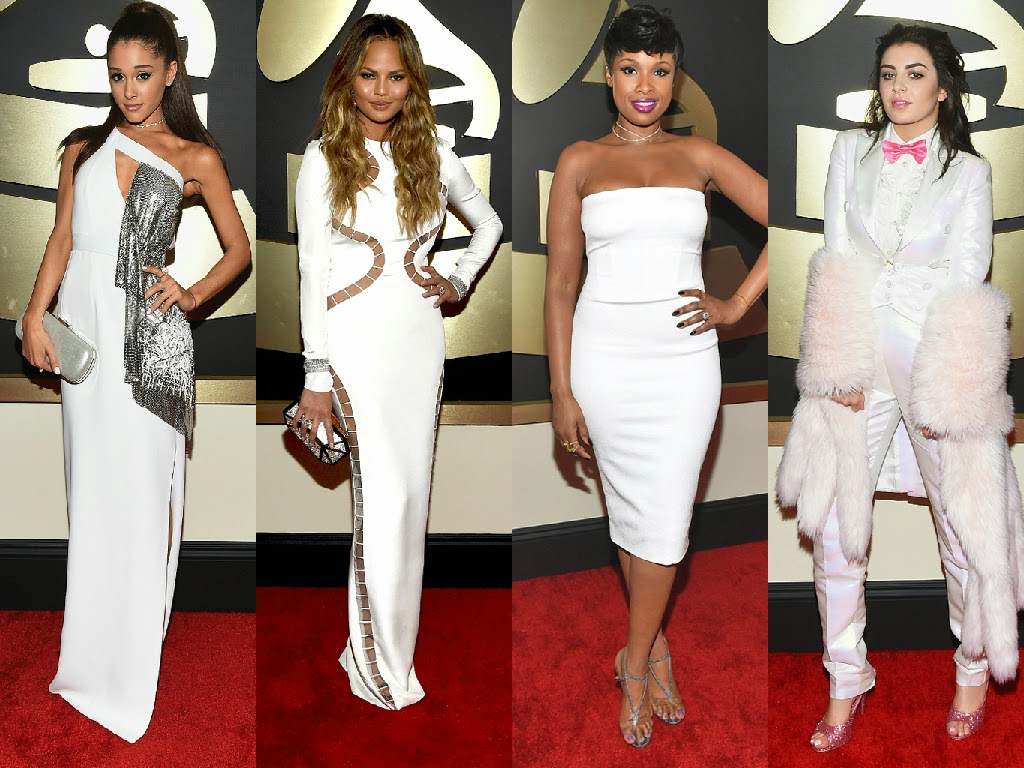 We haven´t reach the colour section yet, not before the sparkling dresses.
Rita Ora, Lady Gaga in Brandon Maxwell, Kim Kardashian in Jean Paul Gaultier and Katy Perry in Zuhair Murad. 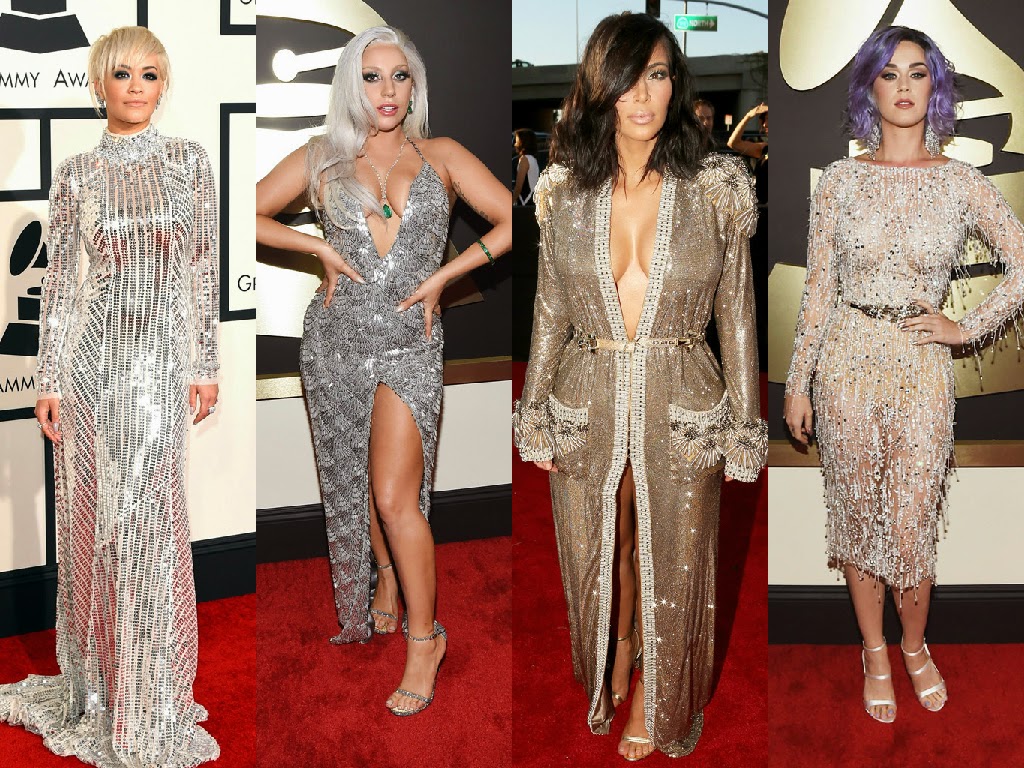 In shades of blue we have
Zendaya (and her short hair) in Vivienne Westwood, Queen Taylor Swift in Elie Saab and Iggy Azalea in Armani Prive.
Here we have the third controversial look by Zendaya, looking like a 50 years old woman. 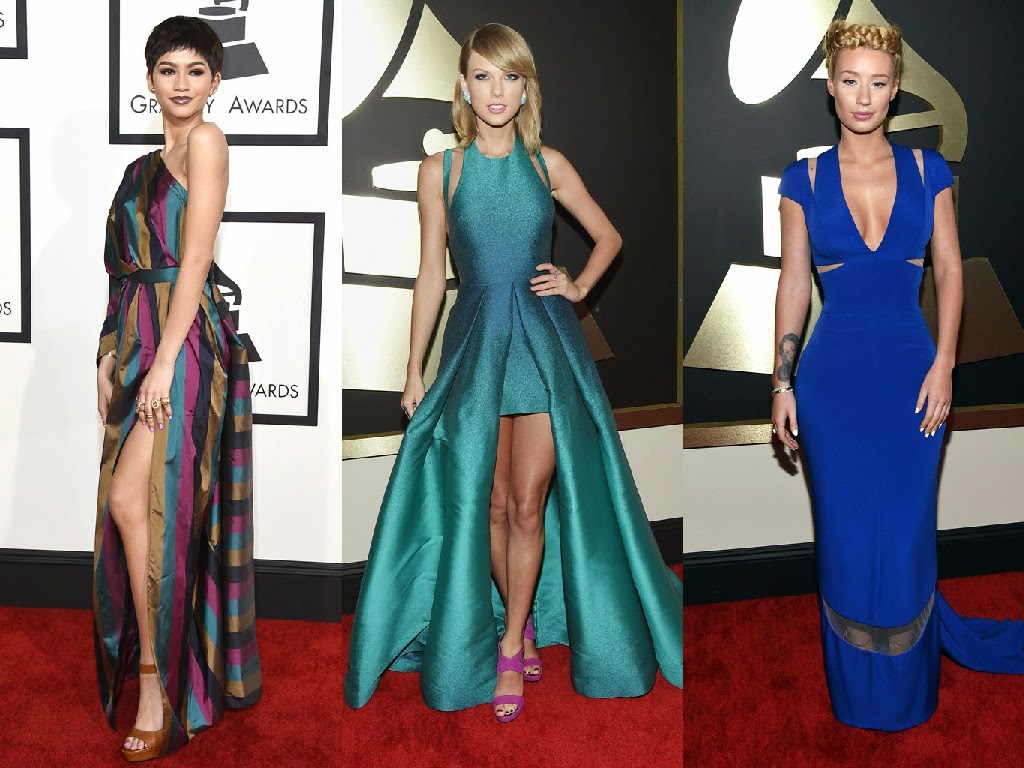 Pink? Pink is the colour the following singers chose:
Rihanna in Giambattista Valli and Katherine McPhee in Pucci.
I bet Rihanna is bringing a group of friends under her dress! 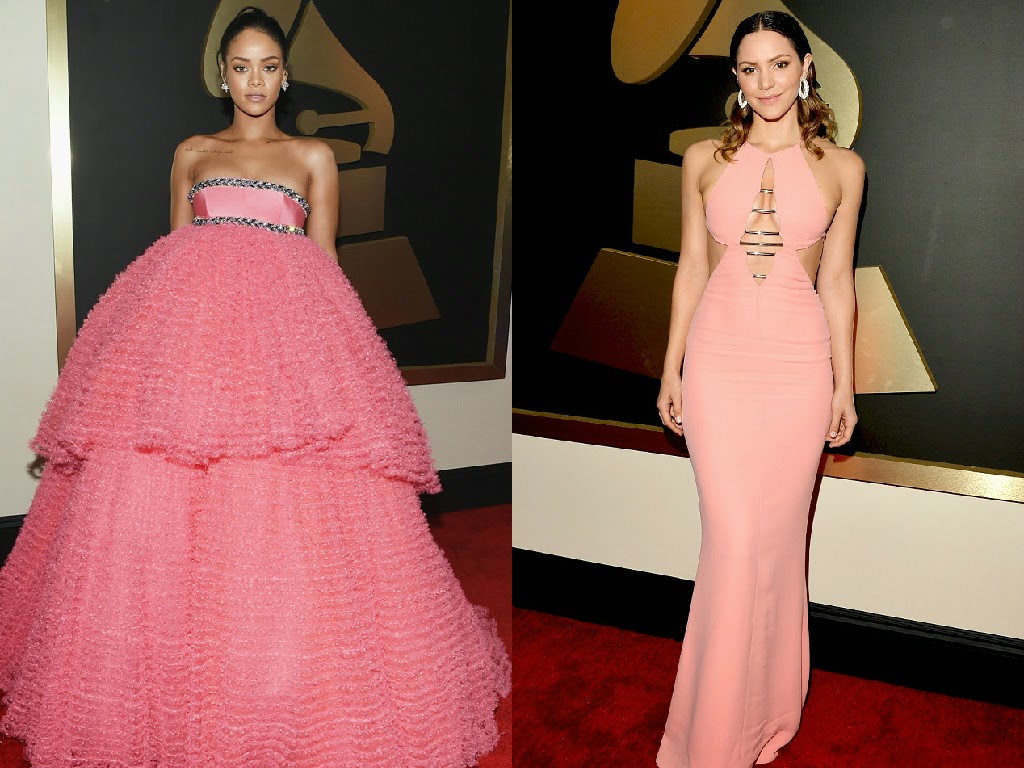 As you may have already noticed I don´t know much about male fashion so I randomly picked the next ones.What I can tell you is that they look original, they are not the typical black suit. Take a look:
Chris Brown, Ed Sheeran, Hozier, John Meyer, Ne-Yo, Oliva Culpo and Nick Jonas, Nicole Kidmand and Keith Urban, Pharell Williams and Helen Lasichanh, Sam Smith and Usher.
I will save all of my jokes for myself, but some looks are funny. 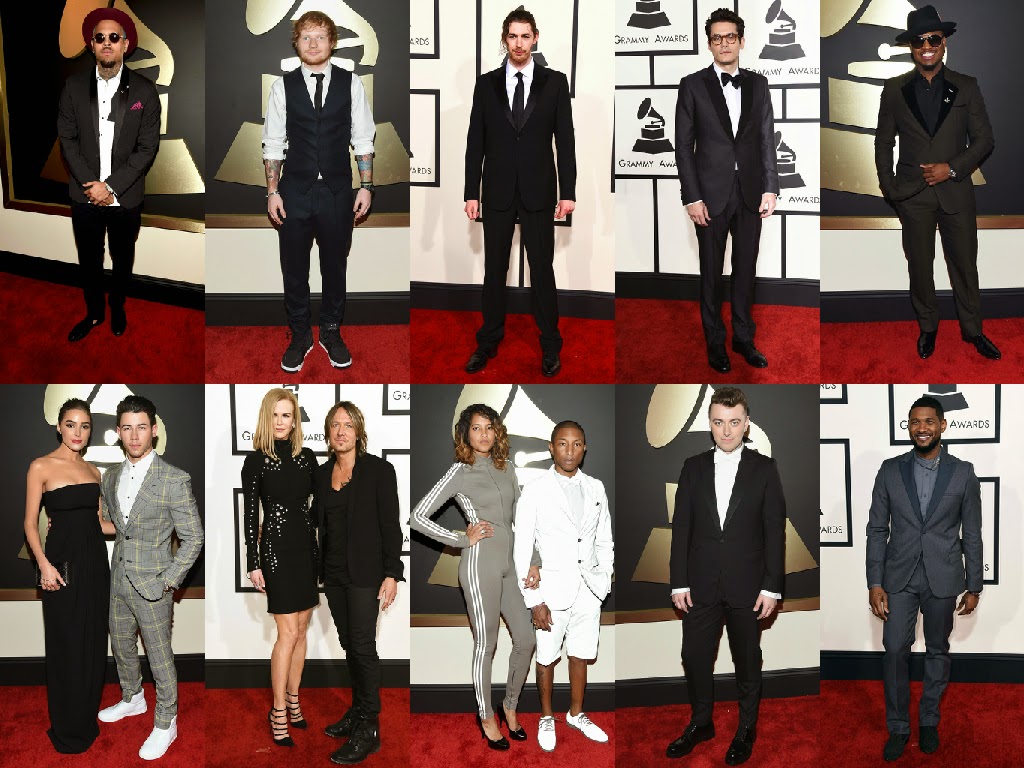 This is too much for one night, I need red carpet holidays. With so many looks it´s hard to pick a favourite outfit, but for the first time in ages I like Miley Cyrus outfit, secondly Taylor Swift and third Ariana Grande. The truth is that none of the dresses made a huge impact on me, but I didn´t dislike them that much, it´s a complicated situation, I´m just going to Shake it Off and be Happy, while I´m Thinking Out Loud of somebody that can Take me to Church and Stay With Me because I´m Just Living for Love and the only thing I want is Just a Little bit of Your Heart because you are the Only One.

Bye Bye! I´m off to see the end of the awards, and if I see any other look I like I´ll update you tomorrow!
xoxo
Orne